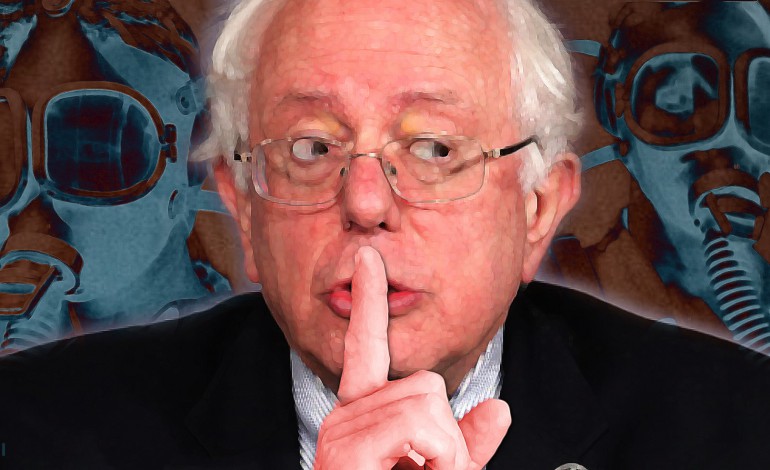 Bernie Sanders is not a Democrat, he is a Socialist. He joined the Democratic Party for one reason, in order to run for the  Presidency of the United States. Although it can reasonably be argued that the Democratic Party has evolved and shifted dramatically to the left , indeed teetering on socialism, Bernie Sanders represents an extreme sprint toward the finish line of unprecedented, massive government and increased control over the lives of this country’s people.

Mr. Sanders is committing a moral and ethical crime, as he  aggressively perpetuates a grave disservice to the young voters, the under-employed and the economically struggling of this great nation. Let’s explore how.

Bernie Sanders promises to raise the current federal minimum wage of $7.25/hr, to $15.00/hr by 2022. What supporters of Mr. Sanders need to know, is that this will cripple existing small businesses and prevent new business starts. Small businesses operate on an extremely tight budget, and the vast majority of businesses fail within their first year as the system currently exists. Simply put, if businesses are required to pay entry level workers $15.00/hr, they will be forced to lay off staff or shut down completely.  Entrepreneurs interested in beginning new businesses, will not launch due to exorbitant payroll expenses, government regulation and taxation. This policy will result in even higher unemployment, particularly among the very groups that Bernie Sanders purports to champion: the young people entering the workforce for the first time, those in poverty, and those with little or no skill. Additionally, as the consumer will ultimately bear the burden, in the form of increased costs for basic goods and services, the raised minimum wage will effectively negate the ability of the poorest among us to afford the most basic  goods and services.

With such a dramatic raise in the minimum wage, the  economically challenged groups will be hurt the most. Quoting a recent statement from California Governor, Jerry Brown (D), following his recent signature into law a $15.00/hr minimum wage, “Economically, minimum wages may not make sense. But morally, socially and politically, they make every sense”. How can it be moral to knowingly implement  bad economic policy?  It cannot, the immorality falls directly at the feet of Mr. Sanders, Mr. Brown, and those government leaders that adhere to such horrific policy, propagated in order to appease their constituency and too secure votes. To implement such policy is a blatant misrepresentation of the facts, facts based on tried and true economic principals. To represent the facts otherwise, is an attempt to keep the poorest of this nation reliant on more government and government assistance. This tactic has proven effective for Democratic politicians, as it ensures that their constituency remain loyal in effort to retain their relied upon hand outs.

Bernie Sanders is a career politician, he has been a Congressman and/or Senator for over 25 years, and yet, he represents himself as non-establishment.

Bernie Sanders would unashamedly confiscate, through exorbitant taxation and fines, money from  50% (the producers) of this country, and give it to the other 50% (the unknowingly shackled) people of this country.  The actual percentage is not the point, the concept is. He would siphon  the very fuel that runs the engine of this country, in order to fill the tanks of those that are perceived to be empty, supposedly by no fault of their own. The problem is, he would be feeding the fuel into the radiator, effectively destroying the engine. If you remove the incentive of the risk takers, the investors, and the job creators through  high taxation and regulation, you effectively destroy  job creation and economic growth. If you cut off the head, the body dies.

Bernie Sanders insists that college tuition should be free. That anyone who so chooses, and meets the most basic of qualifications, has a right to a free education through college. He proposes that since Wall Street required a bailout in 2008-09, that they should now fund college students to perpetuity. Once again, Mr. Sanders, in order to appease his constituency promises the impossible. You cannot repeatedly punish the financially successful through ever increasing taxation, and expect that their success and money stream will continue. What ever happened to the idea of getting a job and working ones way through school? Now here’s a novel idea, sacrifice the Five dollar a day cup of coffee at Starbucks and the latest and greatest iphone upgrade as a start. Plan, work,  or sacrifice, take a semester off if necessary, but please do not fall into this trap that someone else owes you an education, or anything else, because they simply do not.

The exorbitant taxation that a Sanders administration would impose would ensure that the 3-4 Trillion dollars of off-shore money would never return to the United States. Additionally, we will see more and more large companies, such as Carrier, moving their operations to other countries.

There can be no doubt, Wall Street has its problems, and certainly contains its greed and corruption, but among the few with avarice intent and actions, are the many that promote and  facilitate what is great about this country. Wall Street and investment into companies, old or new, is in large part what has propelled this country into the greatest nation this world has ever known. It has enabled ideas, products, and services to come to full fruition, resulting in the highest standard of living that the world has ever known.  Imagine a world without Microsoft, without Apple, or without cellphones, the list could go on and on. These companies, and their revolutionary world changing ideas would not have succeeded had it not been for those willing to invest in those ideas via Wall Street. Wall Street brokers and investment facilitators are the mechanism that puts the money together with the idea. Punish the corrupt individuals of Wall Street, not Wall Street.

Bernie Sanders on Foreign Policy is missing in action. He does not seem to understand that the United States of America MUST, once again, assume the role as the leader of the free world. If this does not happen, as under the Obama administration, then chaos ensues. He insists even today, that ISIS is a direct result of the Bush administration, when in-fact, it was the premature withdrawal of our troops under Obama’s watch, which was against military advice, that created the void that was filled by the terrorist groups, primarily ISIS. Mr. Sanders relentlessly adheres to the notion, that you can negotiate with terrorists and rouge nations such as Syria and Iran. How horribly wrong this type of policy is.  If these types of policies are continued, as they would be under a Sanders presidency, then we the people will bear the severe consequence.

The problem with Socialism, is that eventually you run out of other peoples money- Margaret Thatcher

Those that have chosen to take the journey into Socialism with Mr. Sanders and the ultra-progressive movement, have lost sight of, or have never understood, the core principles that this great country was founded upon. Principles that are outlined within The Constitution of the United States. I would submit, that many of the so called progressives and Bernie Sanders supporters, have not troubled themselves enough to have read the United States Constitution, much less comprehend the freedoms and liberties they are so eager to surrender. Further,  they do not appreciate the sacrifices that countless men and women have made, to preserve these freedoms and liberties that the Constitution provides, for all Americans, both generations past and future.

I have reviewed Bernie Sanders website: http://www.berniesanders.com and listened to his rhetoric, I have found nothing, ZERO, in policy or belief, that reinforces or empowers the individual to aspire to self-reliance and the concept of work!

I cannot pretend to know what motivates a person like Bernie Sanders, but this much is clear, he is either delusional or he is intentionally misleading his supporters. He promotes “entitlement” and the notion of “equality” irrespective of effort, yet, he never speaks of personal responsibility. He pollutes the minds and spirits of many of our young people today, and quite honestly, millions of people of all ages within our country. I am not suggesting that Mr. Sanders is the primary cause of this flawed line of thinking, rather he vigorously promotes it, and slyly takes advantage of it in order to garner support for his socialist agenda. If Bernie Sanders was truly concerned about the youth, the under privileged, and poor of this nation, he would be speaking a message of hope and encouragement. He would teach of values and the benefits of hard work, self-reliance and persistence, and not the message of entitlement, wealth redistribution and the promise that the government will provide for all of your needs.

The first thing one see’s upon opening the Bernie Sanders website is a petition for money. Sure, makes sense, Mr. Sanders is having the time of his life jet-setting around the country on your dime, soaking up the fame and notoriety that his unexpected popularity brings.

Mr. Sanders skillfully leads you to believe that big government is the answer, and that personal accountability is not a necessary component to a successful life. We, as Americans, are not entitled to free college tuition, free healthcare or free anything. What we, particularly the young people of this country are entitled to, is responsible government. Government that does not spend more than it has or intrude into every aspect of our lives. Additionally, we are all  entitled to accountability from our elected leaders, and a government that will do everything within its power, to preserve the freedoms and liberties that are at the very foundation of this country, and to not burden its citizens with horrendous debt.

Mr. Sanders would have us believe that climate change is the number one problem/issue that we face today.  With over 50% of the country on some form of government assistance, a stagnant economy, domestic and foreign terrorist threats, and world instability ever increasing, just to name a few of the consequential issues. Surely Mr. Sanders is joking!

There are several issues, however, due to time constraints and attention span, all cannot be addressed in this column. I would welcome, indeed implore, all that are interested to respond, whether in agreement or otherwise, so that we might explore and attempt to understand together, diverse opinion and ideas, and perhaps come to some logical consensus or conclusive rational resolution to the serious issues that face us collectively as a nation.

In the interim, please review your history books to discover/rediscover why this country was founded well over 200 years ago. You will find, it was to escape tyranny, a government that controlled the lives of its citizens, high taxation and a government that did not represent the common people.

LET US NOT RETURN TO SUCH A CIRCUMSTANCE