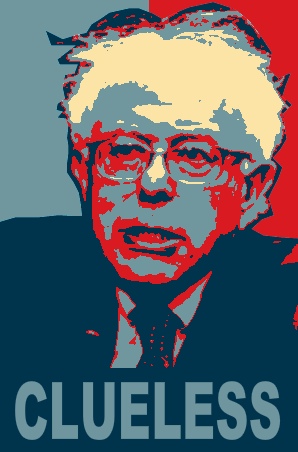 “As an economist who grew up on the “no hand-out, pick yourself up by the bootstraps, trickle down” economics of the Ronald Reagan conservatives, I know very intimately the outlook you express. I also know it to be a sham, a lie told to you by the elites, a morally bankrupt philosophy that leads to oligarchy and suppression of the poor. I did my studies in development, creative destruction, and government policy, and I can tell you that Bernie Sanders has a moral economic argument that is unrivaled in modern American politics. And that it just so happens that it is a long term economic engine that will lead to sustained growth. Please rethink your attempted hatchet job and try some actual research, it may do you some good”.- John (commented on Socialist Sanders Post)

John, thank you for taking the time to post a comment, it is appreciated. You have stated your educational accomplishments succinctly, however, you have provided no argument to support your views. Rather you invoke personal criticism in its place. One thing stands abhorrently clear, the progressive and socialist thinkers of today,  wholly disregard the famous words of revered statesman, JFK.  He said, “My fellow Americans, ask not what your country can do for you, ask what you can do for your country” -John F. Kennedy (D), President of the United States of America (1961-1963)

On the surface your comments evoke passion, however, they stink with the sense of entitlement. You have offered no presentation as to the methodology that Mr. Sanders would implement to affect the Utopian Society, the unachievable society you seek.

Human “progress” happens when humans are free. The progressive and socialist agenda diminishes freedom while promising the unattainable. Bill Gates, as one example, is extremely wealthy because he created tremendous value for a great number of people. The absence of Bill Gates, or those like him, would be a terrible thing, tens of thousands of jobs would not have been created and revolutionary products would not exist.

John, are you jealous of the rich, or are you concerned for the poor? Just what is the source of your discontent? Shouldn’t we be having discussions about how to improve conditions for the poor, without paying them to be slaves to the state?

Guessing by your admission that you “grew up on the no hand-out, pick yourself up by the bootstraps, trickle down economics of the Ronald Reagan conservatives,” era, I think it would fair to say that your are perhaps in your 40’s or 50’s. It is also apparent that you attended college and were educated, and misled by the liberal educators that are so prevalent in institutions of higher learning today. I would also surmise that you are up to your ears in student loan debt, most likely you are unemployed or underemployed , and have most certainly never operated your own business.

If you ever have  operated a business you would surely understand, that government does not create jobs, it in fact inhibits them. Through the use of: red tape, regulation, taxation, and now Obamacare. The bigger government becomes, the harder it is for private businesses to thrive.

There is an old saying ” Free People are not equal, and equal people are not free”- Author Unknown.  As this relates to income or material wealth, a free people will earn different amounts of money. If somehow it were that all people earned the exact same income, they certainly would not be free. Rather, they would be the prisoner of a controlling, freedom robbing, Centralized Government.

Financial equality in a society that is free is an illusion and a falsehood. Some will not work as hard as others, talents and abilities differ, egos, and jealousy get in the way.

If we were to truly live in an economically equal society, orders and laws must be established to include: do not work any harder or be smarter then anyone else, do not be more creative then the next guy, do not invest any differently then any one else, do not enter into any business that might succeed and propel your wealth to greater heights then your neighbor, and certainly do not celebrate individualism or success! In other words, Make damn sure that you are exactly the same as everyone else in every way possible. Violation of any one of the above policies must be backed up with fines, penalties, and perhaps even imprisonment.

I have only lightly touched on one concept of Progressivism and Socialism, economic inequality. The false notions and concepts of Bernie Sanders can be refuted at every level imaginable: private property vs. government owned property, ownership of ideas and concepts, and the right to make a profit for ones efforts and risks, to name but a few.

Socialism and Progressivism are a disincentive to hard work, investment, ingenuity, and the drive to excel. While it encourages corruption in government, repression of the poor, insipidness, and a sense of entitlement.

Due to the Bernie Sanders proponents inability to articulate and rationally explain their position, many have resorted to disruption, insult, protest, and in some cases violence (please look at your evening news). Although this represents a minority, the majority still ignorantly cling to this notion of entitlement. In  posts to follow, I am hopeful to explore in more depth, why so many Millennials and the youth of this nation feel so entitled, and fail to wean themselves from the nipple of their parents  and government assistance to perpetuity? How have we gone so wrong in previous generations to inspire such expectations in our youth?

Bernie is all but eliminated from the Democratic Nomination race, however, his idealism is far from gone. Our attention must now be focused on Hillary Clinton, who, in many respects, is further left then Sanders.